Just before lunch time on Thursday, November 14th, Station 42 was dispatched to a home on Swamp Creek Road near the intersection of Whites Mill Road in Marlborough Township for a building fire. Also on the assignment were units from Tylersport Sta. 72, Upper Salford Sta. 78, Red Hill Sta. 71, Pennsburg Sta. 65 and Trumbauersville Bucks Sta. 58. Deputy 42 (J. Balmer) went responding and was given additional information that the complainants shed was on fire and was not attached to the house. Chief 72 arrived first on location and reported the exterior of a large shed on fire with extension into the woods behind it. Deputy 42 advised Chief 72 to take command of the incident and 42 command was established. Tanker and Engine 72 arrived on location and pulled lines to the rear of the structure to begin fire suppression. As other crews arrived they entered the structure and fortunately found no extension to the building. A large amount of stacked fire wood and a wood shed needed to be pulled apart requiring a lot of man power.

Crews also stretched a line into the woods to begin attacking the woods fire. The fire had burned into multiple trees and was being driven further and further into the woods by the wind. With low humidity, a light breeze and recently downed leaves, the woods fire had plenty of fuel to work with. With the crews on location stretched pretty thin, 42 command requested an engine from Lower Frederick, Station 52, to respond with manpower. A representative from the state forestry service was also requested to respond to the scene due to a very large oak tree that was burning inside. The state forestry service has crews that are specially trained in bringing down large burning trees. Crews on scene had gained control of the woods fire and the large oak tree upon the forestry representative’s arrival so their assistance was not needed. In all, and estimated ¾ to 1 acre had burned.

Crews pulled apart the burned out wood shed, extinguished hot spots around the shed and also soaked down the burned wooded area. Once all mop-up was complete, companies began to make themselves available. The state police fire marshal was notified and is investigating the fire but it does not appear to be suspicious at this time.

Thank you to all the companies that responded, including fire police, EMS and the State Forestry Rep. We apologize if we missed anyone. Corrections can be emailed to webmaster@greenlanefirerescue.org 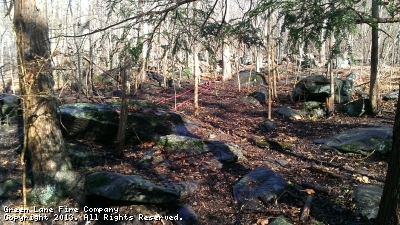 It may be hard to see, but almost every area in the picture where you can see the forest floor, the fire burned through. 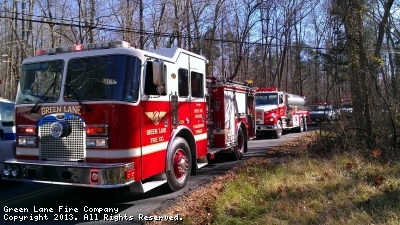 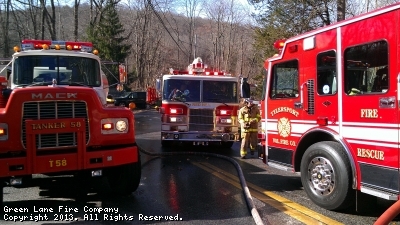 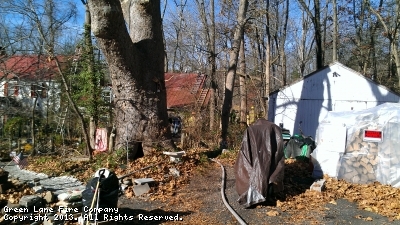 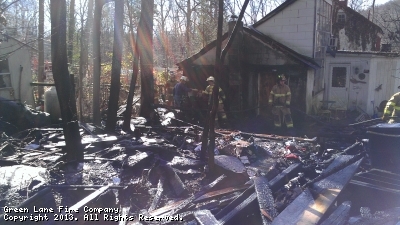 ×
1 of 22 of 2
28 entries in the News
In Honor of The Charleston 9: A Study of Change Following Tragedy
On June 18, 2007, nine firefighters perished in a warehouse fire in Charleston, SC. What was initially dispatched as a trash fire escalated into one of the most scrutinized events in national fire service history.
➜
Building Fire in Red Hill
Members from Green Lane assisted Red Hill on a commercial building fire Sunday September 10th. Squad 42 and Tac 42 responded. Full article on 1st Responder News:http://www.1strespondernews.com/webpages/news/DisplayNews.aspx?PT=state&state=PA&ID=9c7a5b05-fc79-448a-b828-6d08fde13810
➜
Almost Done!

Today's update pics. The New Squad is getting close. Sutphen has completed the pump test and is finalizing tool mounting.
The new Squad 42 has made it to the PA Sutphen facility

A few pics from today.
Update on Squad 42

- a few new pics from Sutphen
Taker 42 assists 78 at 2 alarm fire
Upon returning from the scene of another call Tanker 42 was added to 78's box with confirmed fire. The fire quickly went to 2 alarms. Tanker assisted with water supply, while it's crew assisted with fire suppression.
➜
Update on Squad 42

Green Lane is very excited to be working with Sutphen on the design and manufacturing of our new Squad. Delivery is expected Summer 2017. Keep looking for updates.
Rescue Drill

Rescue drill - May 16th. Station 42 members arrived to find a simulated 2 vehicle accident with one car on top of an SUV. The SUV had simulated entrapment. The crew went in service with fire extinguishment, vehicle stabilization, and extraction.
➜
Standby at Accident

Rescue 42 in service early this morning.
Smoke in the Valley BBQ Contest

The GLFC is proud to announce the purchase of Field 75 from the Telford Fire Company. Field 75 was no longer being utilized by Telford and was purchased at a very fair price by the fire company. The truck is a 1997 Chevrolet / Swab 4x4 with approximately 10,000 miles on the vehicle.
➜
Engine and Tanker assist to Upper Frederick

At roughly 9:45 a.m. on Thursday, November 21st, Tanker 42 and Engine 42 were dispatched to assist Upper Frederick Station 87 with a garage fire in the 2900 Block of Hauck Road in Upper Frederick Township.
➜
Fire spreads rapidly to shed and woods

Just before lunch time on Thursday, November 14th, Station 42 was dispatched to a home on Swamp Creek Road near the intersection of Whites Mill Road in Marlborough Township for a building fire. Also on the assignment were units from Tylersport Sta.
➜
Vehicle off the road by the old iron bridge

At approximately 9:45 a.m. on Wednesday, November 6th, Station 42, Squad 78 (Upper Salford) and Engine 87 (Upper Frederick) were dispatched to the area of Route 29 and Snyder Road at the old iron bridge for a vehicle accident with injuries.
➜
Congratulations

A long over-due and belated congratulations to Firefighter Travis Haber for completing his Firefighter 1 training. The course is long and takes a lot of time to complete, especially for someone who is trying to balance college and work ,as Travis was.
➜
One into a pole with wires down

Just after 9:30 on Tuesday, August 28th, Station 42, Squad 78 and Engine 87 were dispatched to the area of Perkiomenville Road between Penny Road and Upper Ridge Road for a Vehicle Accident with Entrapment.
➜
2 vehicles tie up midday traffic on Gravel Pike

This site has been viewed 413,191 times.
Calls
News
Events
Pictures
Apparatus
Maintained by the members and staff of Green Lane Fire Company. Designated trademarks and brands are the property of their respective owners. Copyright © 2006-2022. YourFirstDue Inc. All Rights Reserved. Content on this web site is supplied by Green Lane Fire Company. YourFirstDue Inc. cannot be held responsible or liable for any content, text, pictures, or any other media found on this web site.
Management login
Powered by